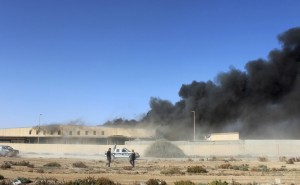 Forces loyal to Libya’s internationally recognised government carried out air strikes on Wednesday near the capital Tripoli, which is controlled by its rivals, officials said, as United Nations peace talks were due to start in Morocco, wrote GulfToday.

Two governments, one based in the east, the other in Tripoli, are fighting for control of Libya and carrying out tit-for-tat air strikes, four years after the ousting of leader Muammar Qadhafi.

UN Special Envoy Bernardino Leon will host a new round of talks in Morocco on Wednesday, Western powers including the United States, Britain, France, Germany said in a joint statement.

Mohamed El Hejazi, spokesman for army forces loyal to the government of Prime Minister Abdullah Al Thinni, said war planes had attacked Tripoli’s Mitiga airport and other targets in western Libya. “This is part of our campaign against terrorism,” he said.

Abdulsalam Buamoud, spokesman for Mitiga airport, said the planes had missed the airport. A security source said a missile battery some 10km from the airport on the outskirts of Tripoli had been hit. Thinni, his government and the elected parliament have been confined to eastern Libya since a group called Libya Dawn seized Tripoli in August, set up their own administration and reinstated an assembly.

The UN talks aim to persuade both sides to form a unity government and lasting ceasefires.

Western leaders say the negotiations are the only way to end the chaos in Libya where militants loyal to Islamic State to have gained ground, exploiting a security vacuum like they did in Syria and Iraq.