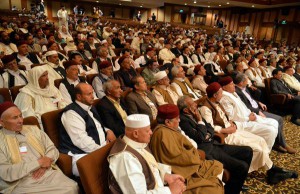 A group of Libyan tribal leaders have said, at the conclusion of a conference in Cairo on Thursday, that they refuse any dialogue with Islamist groups, including the Muslim Brotherhood, asserting that it is a “terrorist organisation.”

A number of Islamist groups are battling the internationally recognised Libyan government, based in Tobruk in the east, for control of the country. A rival government has been set up in Tripoli, which is under the control of Islamist-linked militias.

Some of these groups are allied with Egypt’s banned Brotherhood, which the Egyptian government declared a terrorist organisation in 2013.

The tribal leaders also agreed to form a Tribal Council, with members to be named by the Libyan parliament, which will be tasked with national reconciliation as well as developing Libya’s relationship with neighbouring countries.

The forum, held in Cairo from 25 to 28 May, was organised by the Egyptian Council for Foreign Affairs to discuss possible visions for the country’s future.

The tribal leaders affirmed their support for the Libyan army and agreed that parliament is the only representative of the people.

Representatives of the UN as well as of Western and Middle Eastern countries attended the opening and closing sessions of the forum.