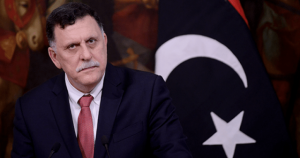 Libya’s Prime Minister Fayez al-Sarraj plans to announce his resignation soon but will stay on in a caretaker capacity through negotiations for a new government in Geneva next month, according to officials familiar with his thinking, like reported by bloomberg.com.

With Turkey’s help, the internationally recognized premier, whose government controls only parts of western Libya, in June quashed a yearlong offensive on the capital by eastern commander Khalifa Haftar. But Tripoli has since descended into political infighting, and Sarraj has also faced pressure from a protest movement against corruption and poor services.

By announcing his resignation, he would relieve some of the pressure on himself while setting the stage for his exit after the Geneva talks, two officials said on condition of anonymity to discuss confidential conversations. The rival sides will be asked to agree on a new presidential council structure that unifies the country’s dueling administrations and schedule elections.

The move is expected to be welcomed by Haftar’s regional backers, including Egypt and the United Arab Emirates, while facilitating the talks to unite the conflict-riven North African nation that sits atop the continent’s largest oil reserves.

Haftar himself has increasingly given way politically to Aguileh Salah, the head of parliament who’s proposed a political initiative to unify the country’s institutions and is now leading political talks for the eastern camp, Arab and Western diplomats said.

Four officials said Sarraj and his aides have discussed his plans with Libyan and international partners. He’s expected to make his announcement by the end of the week, two officials said. A spokesman for Sarraj declined to comment on the prime minister’s plans.

The country has been divided since a NATO-backed uprising in 2011 ousted dictator Muammar al-Qaddafi. The latest war, which started in April 2019 with Haftar’s march on Tripoli, drew in military intervention by Turkey, the UAE and Russian mercenaries. Both sides agreed to a cease-fire last month.