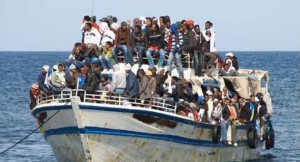 One of the leading smugglers at the main departure point for Mediterranean migrant crossings in Libya has scoffed at plans to launch a military campaign against people traffickers, and recommended that the EU provide more support for his marginalised ethnic minority instead, according to Theguardian.

The smuggling kingpin, who organises about 60% of the boat trips from Zuwara, according to claims by his associates, questioned how European navies would be able to break the sprawling spider’s web of smuggling networks that span several countries in north Africa.

The 33-year-old law graduate, who asked to be known simply as “Hajj” – an honorific generally used by people who have completed the pilgrimage to Mecca – said the EU would be better off investing in local infrastructure for the long-marginalised Amazigh minority, the Berber tribe whose members run the smuggling networks in Zuwara.

Despite the apparent risks to his livelihood, Hajj also advised the EU to combat his business by directly investing in Zuwara’s underfunded local coastguard; creating stability in Libya; and doing more to deplete the dwindling stocks of fishing boats used by smugglers to take refugees to Italian waters.

“What are they going to do, put two frigates here? Two warships? In Libyan waters? That’s an invasion,” said Hajj, in a late-night interview with the Guardian, in the hours following the EU’s decision to initiate a naval operation against smugglers.

Lying on the floor of a friend’s house, eating two snapper fish in the company of a local haulier, trader and musician, Hajj did not appear worried by the EU’s threats to end his trade.

“They’re just lying,” added Hajj, who claims to have successfully sent 1,000 people to Italy in the past week. “They’re liars. And it’s not the first time. Last year the same thing happened when these tragedies occurred. Human rights people came out and started talking, and politicians met, and said they’d take action. But nothing happened. It’ll be the same thing.”

Rather than pursuing vague military options, Hajj suggested providing more support for the Amazigh minority, an indigenous ethnic group that settled on the Libyan coast long before the arrival of the Arabs who would later form the country’s majority. The Amazigh were heavily oppressed under Muammar Gaddafi, the Libyan dictator overthrown in 2011, and relied on smuggling profits because of a lack of economic alternatives.

Following Gaddafi’s fall, Hajj said residents in Zuwara initially suspended most smuggling operations while they waited to see if the EU and the post-dictator Libya would give greater recognition to the Amazigh.

Sipping on mint tea, Hajj said: “After the revolution we wanted to return the favour to the EU because they stood with us against the tyrant, and to show that it could stop. But I reinitiated my project because I found out the EU was just taking us Amazighs for a ride. It was apparent there was nothing for human rights. The Libyan government is not standing beside us, and the EU is not helping us either. If you’re not protecting me, I will not protect you. I’ll put pressure on you.”

Hajj admitted that greater help for the Amazigh would not convince all smugglers in Zuwara, or in the several non-Amazigh smuggling hubs such as Garabulli, from where the boat that sank with 800 onboard earlier this week departed. But he claimed he would down tools because the Amazigh cause was of more personal importance to him than the smuggling trade.

Before Sunday’s disaster, aid agencies estimated that 20,000 migrants had reached the Italian coast this year and 900 had died. Overnight on Monday, Italian police arrested two suspected people traffickers among the survivors of the migrant boat that capsized on Sunday, as the United Nations confirmed that at least 800 people died in the sinking.

Prosecutors said they had detained a Tunisian man, believed to be the captain of the vessel, and a Syrian, allegedly a member of the ship’s crew, taken from a group of 27 haggard survivors who arrived in the Sicilian port of Catania on Monday evening. The two were charged with people trafficking and the captain was also charged with reckless multiple-homicide in relation to the sinking.

Several Zuwarans agreed with Hajj that the strength of the smuggling trade is linked to the Amazigh struggle. “If the constitution recognised the Amazigh culture, then the smuggling would be reduced considerably,” argued Hafed Fteis, a historian of the Amazigh’s once-banned language, Tamazight. “At the moment [Amazighs] do not respect the laws that are brought to us. If they don’t recognise us, we feel that we should not recognise them.”

A coastguard officer, who gave his name only as Mostafa, highlighted how his colleagues have not been paid in months; and noted that the port only had one functioning coastguard vessel – an inflatable boat no bigger than some smuggling floats. Another is broken-down, while a third has not been returned from repairs in Tunis, because Libyan officials have not paid the Tunisian technicians.

Mostafa said: “The EU, if it really wants to stop smuggling from Zuwara, they need to bring us the tools to this office.” He said millions had been lost by giving money to the central government in Tripoli, which had never reached Zuwara. “We need serious tools, boats, proper patrols, a committee to train us. Don’t give the aid to Tripoli – give it to us in Zuwara.”

Continuing his list of suggestions for the EU, Hajj called for the body to step up attempts to end the civil war in Libya, which would in turn make the country a destination for migrants, rather than a place of transit to Europe. Thirdly, he advised Italian coastguards to destroy the secondhand shipping vessels that are used to ferry migrants towards Italy, rather than leaving them to drift empty on the high seas.

“This is something that puzzles me,” said Hajj. “When the migrants go out to sea, and the Italian coastguards rescue them, why do they leave the boats intact? That helps us, because all we have to do is go out to sea and tow it back to shore.” There are instances where the same boat has been used four times in four separate migrant missions.

This would be a particularly fruitful means of combatting people smuggling, Hajj said, because there is currently a shortage of fishing vessels in Libya. Usually smugglers buy second-hand fishing boats for around £20,000, to use on smuggling missions to Italy. But a shortage of boats has forced smugglers to turn to ship owners, who usually try to avoid the smuggling trade, and who therefore will only sell their boats for the inflated price of around £40,000.

The shortfall in fishing boats has also raised the price of Libyan fish because there is a “lack of fishing boats going out to sea to fish. They’re all being used by smugglers”, says Hajj.

Asked why he was giving away the secrets of his trade, Hajj replied: “Obviously this will affect me. But I’m doing [smuggling] out of anger at the EU, after I found out that the EU had peddled with the Amazigh identity and its governments didn’t assist our culture.”