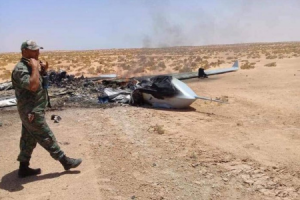 The Libyan National Army has shot down a Turkish drone which attempted to target al-Jufra air base, an Al Arabiya correspondent reported.

The drone was shot down after taking off from Misrata airbase and before targeting the al-Jufra air base, according to a statement from the LNA.

The LNA has controlled the al-Jufra strategic air base since June 2017. The district of Jufra is just over 500 km southwest of Benghazi, and about the same distance southeast of Tripoli.

Libyan forces loyal to eastern-based commander Khalifa Haftar launched an offensive in April to capture Tripoli, home to the UN-recognized Government of National Accord (GNA), which relies on the support of Turkish-trained militias who are suspected of facilitating the movement of foreign extremists from Syria and Iraq into Libya.