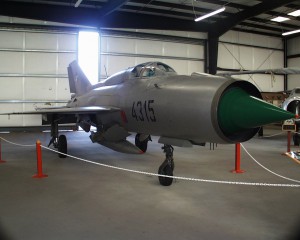 A recently released satellite image shows six MiG-21s at Gamal Abdel Nasser Air Base on 21 April. Five of the six are painted in the distinctive camouflage pattern of the MiG-21MF jets that are believed to have been donated to the LNA by Egypt.

More evidence has emerged showing that the Libyan National Army (LNA) continues to receive aircraft and armoured vehicles from Egypt and the United Arab Emirates (UAE).

The LNA now appears to have five MiG-21s that are believed to have been supplied by Egypt. The aircraft seen in photographs released on social media channels associated with the LNA show that at least some of these aircraft are MiG-21MFs – a type not previously been in service in Libya – and painted in a brown and yellow camouflage scheme that is closer to one used on Egyptian MiG-21s than on Libyan ones.