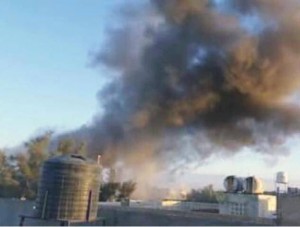 Forces loyal to Libya’s eastern government said they had carried out an airstrike against opponents in the central Jufra region, according to arabnews.com.

Ahmed Al-Mismari, a spokesman for the eastern-based Libyan National Army (LNA), said the strike had targeted a camp used by the Benghazi Defense Brigades (BDB), a force that the LNA has previously clashed with.

The LNA and the BDB are on opposite sides of a conflict in which two loose and shifting alliances have battled for power in Libya since 2014, aligning themselves with rival governments in Tripoli and the east.

In recent months the LNA, led by Field Marshall Khalifa Haftar, has made military gains in Benghazi and Libya’s Oil Crescent region, provoking several attempted counter-attacks by his rivals.

“This was a pre-emptive strike against militias that are mobilizing for an attack against the Libyan army,” Mismari said. There was no immediate comment from the BDB.

The LNA carried out airstrikes this month to repel what it said was an attempt to recapture Oil Crescent ports it took control of in September. Shortly afterward, it launched strikes against opponents at a military base in Jufra.

The strikes have raised fears of a new escalation in Libya’s conflict. A UN-backed government in Tripoli has so far failed to reconcile Libya’s warring factions.