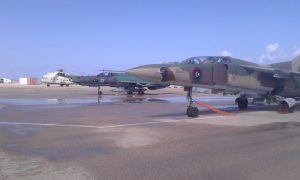 “The Libyan air force struck and destroyed the biggest concentration of Daesh (ISIS) south of Sirte, after monitoring the site over a period of time,” said Sherif al-Awami, an air force commander with the Libyan National Army.

The site contained a large camp with military vehicles and stocks of petrol and water and had been used as a base for mounting attacks, he said.

ISIS was driven from Sirte last year and has been trying to regroup in the desert to the south, launching occasional forays into inhabited areas and attacks against local forces.

The United States has reported launching three sets of air strikes against jihadist camps in the area this year.