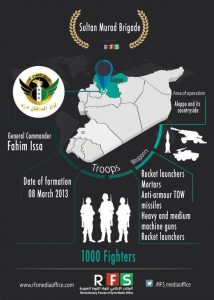 The Libyan National Army, commanded by Khalifa Haftar, escalated its attacks against Turkish military targets in the capital Tripoli, announcing the killing of dozens of Syrian mercenaries, who are loyal to Ankara, like reported by aawsat.com.

The LNA also downed a Turkish drone and destroyed Turkish air defenses at the Mitiga air base.

The drone was shot down by LNA defenses in the al-Khila region, saying the aircraft had tried to attack military positions and units.

Furthermore, LNA spokesman Ahmed al-Mismari disclosed the details of a telephone call intercepted by his forces and that exposed “terrorist Syrian gangs that were recruited by the terrorist (Turkish President Recep Tayyip) Erdogan.” The telephone conversation revealed plans to combat the LNA, he added.

Mismari said that 35 “Syrian terrorists” from the Sultan Murad brigade were killed in the Salaheddine area in Tripoli.

The LNA is still committed to the truce despite the ongoing hostile terrorist operations, whether on the field, through the media or provocative Turkish statements, he declared.

The army is “always prepared to carry out any combat operation for the purpose of deterring or blocking any terrorist violation,” he vowed.

He also accused the so-called “deterrence force”, which is affiliated with Fayez al-Sarraj’s Government of National Accord, of targeting civilians, kidnapping individuals suspected of supporting the LNA or opposing what he described as criminal and terrorist gangs and “Turkish invaders”.

In the east, Haftar received at his Rajma headquarters a delegation of aides and envoys from France, Italy and Germany. They underscored the role played by the LNA general command “in eliminating terrorist militias and gangs.”

These goals cannot be achieved without the elimination of terrorist militias that have not respected their commitment to the ceasefire, it added, accusing them of attacking civilian areas in Tripoli.

The general command stressed the “LNA’s right to continue its mission to liberate all Libyan territories in honor of the sacrifices and heroics of its martyrs, who were killed in their pursuit of the aspirations of the Libyan people to live in a country ruled by the state of law, justice and equality.”

In Tripoli, Sarraj chaired a government meeting, which notably did not comment on the resignation of United Nations envoy to Libya Ghassan Salame. The gatherers instead focused on financial affairs amid the shutdown of oilfields by tribesmen loyal to the LNA.