You are here: Home / Mediterranean / Libyan National Army captures Benghazi terrorists involved in killing of the US Ambassador 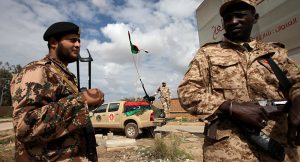 The Libyan Army say they have captured terrorists responsible for the deaths of the US Ambassador in the Benghazi attack in 2012 and a US teacher in 2013, like reported by dailymail.co.uk.

The Libyan National Army said they detained Islamists responsible for the deaths of Ambassador Christopher Stevens in 2012 and US chemistry teacher, Ronnie Smith, also murdered in Benghazi in 2013.

A spokesman for the Libyan National Army tweeted: ‘Some of those involved in the attack on the U.S. consulate in #Benghazi and killed Ambassador #Stevens are in custody and will be prosecuted for this crime.’

He also said: ‘In the case of the American teacher #RonnieSmith, assassinated in Benghazi in 2013, we announce that those who took part in this crime are in custody.’

They added that the chief who ordered the attack, Ahmed Bokhatala, was already in prison in the US.

There was no further information on the number of suspects or their identities.

Smith, from Texas, believed his Christian faith would guide and protect him when working in the volatile region.

The 33-year-old, who had a wife and young son, was brutally taken down while jogging in a drive-by with the killers riding in a Jeep in December 2013.

Smith’s death came a year after the terrorist attack at the US consulate in Benghazi, as al-Qaeda’s boss urged Libyans to attack Americans.

Ambassador Stevens was murdered along with three other Americans by Islamic militants in an attack which shocked the world on September 11 2012.

The Libyan National Army has sought to purge the country of Islamist militants after the country was torn apart by civil war after the death of Moammar Gadhafi in 2011.