You are here: Home / Mediterranean / Libyan National Army announces it is advancing on ‘heart of Tripoli’ 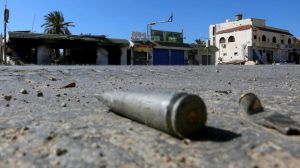 The Libyan National Army (LNA), commanded by Khalifa Haftar, declared on Monday that it was advancing on the “heart of Tripoli”, nearly a year since it launched its operation to rid the capital of terrorist and criminal militias loyal to the Government of National Accord (GNA), like reported by aawsat.com.

The military was closer now, more than ever, in claiming victory in the battle it kicked off in April 2019 as it advanced on the Abou Selim neighborhood.

The move takes it one step closer to the GNA headquarters, Tripoli sea port and the central bank of Libya. Victory was expected next week.

Commander of one of the Tripoli battlefronts told Asharq Al-Awsat that relative calm had returned on Monday, a day after fierce fighting that allowed the LNA to advance on central Tripoli.

“Our forces advanced on the Abou Selim front and captured important positions,” he told Asharq Al-Awsat on condition of anonymity. Two commanding members of pro-GNA militias were killed in the fighting.

“This is significant progress because it means our forces are close to reaching the heart of the capital and infiltrating deeper into it because residents of the area support the LNA,” he added.

“The coming hours will carry good news,” he stressed without elaborating.

Separately, the LNA said that its chemical unit had started disinfecting several positions it had seized from pro-GNA militias in the al-Mashrou and al-Hadaba areas as part of precautions against the new coronavirus.