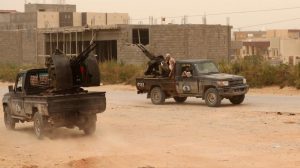 The Libyan National Army (LNA) led by Marshal Khalifa Haftar announced Tuesday a sudden advance in the battle to seize control of the capital, Tripoli, from militias backed by the Government of National Accord (GNA) after nearly five months of fighting, like reported by aawsat.com.

A statement by the Media Center of the LNA’s Dignity Operations Room said the “militias are beginning to collapse on various fronts after painful and accurate airstrikes and advances near their bases.”

The official said the militias in Tripoli are “very weak,” but he declined to disclose the number of casualties or the size of their losses.

LNA’s Military Information Division aired video footage on Tuesday showing the surrender of a group of militiamen. It said the fighters handed over their weapons, ammunition and vehicles to military units near Tripoli.

Meanwhile, Forces from Fayez al-Sarraj’s GNA said they took control of new positions in the Ramla battlefront, south of the capital.

The forces announced repelling an LNA attempt to advance from the front towards the capital.

Field Commander in Volcano of Rage Operation Taher bin Gharbiyya said his forces have taken control of new positions in this area.

The media loyal to the GNA quoted some of its military officials as saying that its air force bombed an LNA convoy on its way to the airport, located in the coastal city of Sirte.

It noted that most of the vehicles in the convoy, which had departed from al-Jufra air base, were destroyed in the bombing.