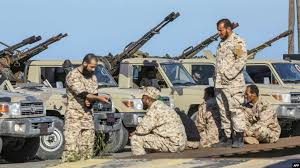 The Libyan National Army (LNA), commanded by Khalifa Haftar, declared Sunday that it had repelled a “bold” attack by the Government of National Accord (GNA) forces in the western city of Tarhuna, dealing them heavy blows, like reported by aawsat.com.

The military also announced that it has made advances in the fighting against the GNA in Tripoli.

The developments have been met with silence by the United Nations mission and American embassy. The British embassy was the sole mission to acknowledge the unrest, tweeting its concern over the “violence in western Libya and the cost in civilian casualties. We urge against all escalation. Fighting must stop if for no other reason than to save lives and respond to shared threat of COVID-19.”

Commenting on the GNA push on Tarhuna, the LNA said its forces had deterred “desperate attempts” to advance on the city by terrorist and militia gangs under Turkish air cover.

In a statement, the military stressed that its “brave soldiers repelled the assault, defeated the enemy and forced it to retreat.” It also released photos to back its claim. “The gangs suffered heavy losses and several of their members have been detained,” it added, saying that they even left their dead behind as “as they fled our heavy blows.”

Moreover, the LNA announced that it had made advances in southern Tripoli, capturing more positions in the Ain Zara area.

Elsewhere, LNA defenses shot down a Turkish jet flying over the al-Wishka area in Abugrein, east of the coastal city of Misrata. On Saturday, the army destroyed, in a series of air strikes, several armored vehicles belonging to local militias.

Pro-GNA forces meanwhile, continued their attack on Tarhuna, claiming they had achieved the goals of the first phase of their assault. Sources from the GNA alleged that they will be able to capture the strategic al-Watyah air base and Tarhuna city within three weeks, adding that the air force will help secure the victory.

Capturing the air base, 125 kilometers southwest of Tripoli, will deal a blow to the LNA that uses it as a platform to launch attacks against Tripoli.

Separately, LNA spokesman Ahmed al-Mismari announced that the military had arrested a major human trafficker in the al-Twaisha region south of Tripoli.

Saleh al-Dabashi was captured inside a Turkish armored vehicle along with several Syrian mercenaries and Libyan fugitives who are all backed by Turkey.

Saleh is the brother of Ahmed al-Dabashi, also known as “Ammu”, a human trafficker on an international blacklist.

Mismari said Saleh’s arrest demonstrates “the extent of Turkey’s expansion of its criminal activity… which is threat to not only the Libyan people, but the entire Mediterranean area.”

He said Saleh was in charge of running the Sabratha detention center, which has witnessed some the worst crimes against humanity against migrants, such as slavery and trafficking, between 2012 and 2017.

The Martyr Anas al-Dabashi militia was also responsible for the coastal security of Sabratha, one of the hotbeds of human trafficking in Libya. The militia was tasked with this mission through an agreement with the GNA aimed at stopping illegal migration.