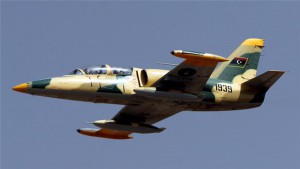 There has been no independent confirmation of the strikes, or any reports of casualties, but the air force has carried out numerous strikes against such boats in recent months.

Libyan National Army (LNA) and associated forces have for the past two weeks been pounding Islamist militias, including Islamic State (IS) fighters, who are hemmed into four districts of Benghazi, in an offensive launched by the head of the Libyan armed forces, General Khalifa Hafter and codenamed Operation Doom.

Military sources say the districts are almost empty of civilians, but army advances are held up by snipers and sporadic rocket and artillery fire from the largely ruined areas.

The army says the sea supply line from Misrata is the reason Islamist units continue to fight on in Benghazi, accusing Misratans, prominent members of the former Libya Dawn alliance, of prolonging the battle. Last week, Benghazi council said Misrata council bore responsibility for the city’s sufferings because of the continuing supply of fighters and weapons and that it would take legal action against Misrata.

Hafter has been fighting to capture Benghazi in a number of offensives that first began in May of last year, with the artillery and rockets of both sides reducing some areas, including parts of the historic quarter by the port, to rubble.

Several hundred soldiers and civilians have died in the campaign, including 24 soldiers since Operation Doom started. The LNA claims dozens of militants have been slain.

In this battle, the boats bringing supplies from Misrata may be the key element, with the air force having acquired new jets recently and also keen to acquire the radars and night vision equipment to enable them to be pinpointed for strikes.

Meanwhile, randomly fired rockets continue to fall into residential areas.  Today, a young boy was killed and his mother critically wounded when a random missile hit their home in Buhdeima.