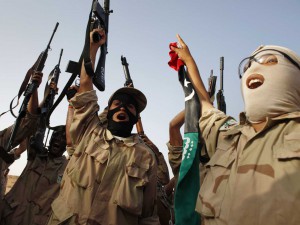 General Mohammad al-Ghusri, spokesperson for Operation Strong, as it has been named, claims that Al-Baghla checkpoint has been secured which is 60 kilometers from Sirte. The Libyan Gazette must be referring to whole area not the city itself in its claim:The Libyan army made significant gains against ISIS forces on Wednesday after troops fighting in the Government of National Accord’s (GNA) military campaign against ISIS, called Operation Strong Foundation, killed 100 ISIS fighters in Sirte.Islamic State administrative offices in Sirte are reported shut down.

Al-Ghasr reported that the militia were advancing rapidly toward Sirte after they had captured 12 IS fighters subsequent to securing Al-Baghla. Al-Ghasri claimed: “We are making remarkable advances against the radical groups of ISIS and we are eyeing advance toward Sirte, ISIS’s stronghold.” He said that a large number of IS forces had fled the city after they suffered heavy losses in Wednesday’s battle. The Libyan air force carried out half a dozen air strikes on key IS positions after Al-Bagla checkpoint was taken causing them to abandon their positions. Eight IED’s planted by retreating IS forces were defused. The Libya Observer reports that Operation Strong had also secured the Al-Khamseen checkpoint on the coast road just 50 kilometers from Sirte.

While General Khalifa Haftar, commander in chief of the House of Representative (HoR) claimed he was launching an offensive against Sirte almost three weeks ago he so far has not engaged with them at all. He is rumored to be attempting to secure the oil ports at present controlled by the Petroleum Forces Guard. Representatives of Hafter’s GNA have met with the PFG in Ras Lanuf but there are conflicting reports about what transpired. Ras Lanuf is not far from the eastern border of territory controlled by IS. Instead of moving against Sirte, Haftar has launched Operation Volcano against the Shura Council of Derna a group of jihadists who were instrumental in driving the Islamic State out of the city of Derna.

His commander in chief in the west in Zintan, Abdul Razak Al-Nazhuri far from helping to attack the Islamic State has threatened to liberate the capital Tripoli from militia who support the GNA and provide security for the city. There is no response from Martin Kobler, Special Representative of the Secretary General, or from the PM of the GNA Faiez Serraj.

In the recent battle against IS, UK special forces reportedly fired a missile at an IS suicide truck loaded with explosives and blew it up. This helped stop the IS from advancing against GNA forces. Mohammed Durat, a troop commander in Misrata said: “My unit works just with English. I have met with them personally and they have destroyed two suicide vehicles that were targeting my fighters.” This report comes just two days after the UK defence secretary Michael Fallon to told the UK House of Commons:“We’ve made it clear that we are not planning any kind of combat role either for our troops or for the RAF in Libya. That is not part of our planning. If we considered further military action against the Daesh [IS], wherever it was – whether in Libya or anywhere else – we would of course come to this house to discuss it first.”

Many critics claim that the UK government has been less than candid about its role and plans for participation in an intervention in Libya. US special forces are also reported to be carrying out patrols and observations in Misrata. There are also reports of French, Italian, and Jordanian special forces being in Libya.