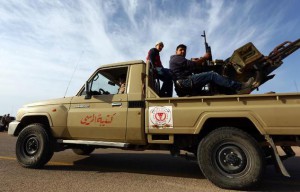 A Libyan militia loyal to the Islamist-backed government in Tripoli says it arrested the leader of the Islamic State branch for a western city bombed by U.S. forces last week, the Associated Press reports.

The Special Deterrent Force says in a Facebook post Thursday, February 25 that it detained the city of Sabratha’s IS leader named Mohammed Saad al-Tajouri and killed dozens of IS members in a gunbattle. Al-Tajouri was also known as Abu Sulieman.

SDF says he was sent by IS leaders in Sirte — a central city controlled by Islamic State — to take charge of Sabratha. The militia says it will release videos of the arrest and al-Tajouri’s purported confessions.

IS tried to take over Sabratha by storming the security headquarters and beheading at least 12 of the SDF fighters inside on Wednesday.