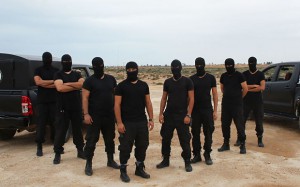 As the pair of black SUVs sped towards us across the coastal scrubland of western Libya, it was hard not to feel a twinge of apprehension. After all, in the lawlessness that prevails four years on from Colonel Muammar Gaddafi’s fall, trunkfuls of men in black balaclavas are often the prelude to a starring role in an Islamic State of Iraq and the Levant (Isil) beheading film.

Yet despite their menacing appearance, the only people the Masked Men of Zuwara are trying to scare are the local people smugglers, who have turned the port into north Africa’s most notorious hub for migrants crossing the Mediterranean.

In the last three years alone, tens of thousands of people have set sail from Zuwara’s shores, which are the nearest point on Libya’s 1,000 mile coastline to the Italian island of Lampedusa.

The town’s name has also been linked to several of the migrant crisis’s worst tragedies, including the drowning of 800 people in April that prompted the EU to step up rescue patrols.

Now, fed up with the damage to their town’s reputation – and despairing of any help from Europe – the Masked Men have taken matters into their own hands, declaring war on a racket that they claim was turning Zuwara into the people-trafficking equivalent of Pablo Escobar’s Medellin.

“People think of Zuwara as a symbol of smuggling, but we are also now a symbol of the fight against it,” said Adam Abza, a spokesman for the Masked Men, who smashed their first people-smuggling ring in late August. “Europe will not find a single illegal migrant coming from Zuwara in the Mediterranean now. But we are doing a job that Europe should really be doing itself.”

Certainly, while they may not dress like EU-trained Frontex officers, the “Specialised Intervention Squad”, to give them their official name, may be among Europe’s few hopes for policing Libya’s vast coastline at present.

The country has been in chaos ever since civil war broke out between two rival political factions in 2013, both of whom rejected a UN-brokered peace deal last week.

Western embassies have pulled out of the capital, Tripoli, and further east along the coastline, the black of Isil now flies in Col Gaddafi’s former home town of Sirte. Just to get to Zuwara last weekend involved driving down a road plagued by tribal gun battles and kidnappings.

Even the Masked Men, who number some 130 trained gunmen, are not complete masters of their domain. Set up as a volunteer police force in Zuwara in 2012, they are now the main crime-fighting force in the city, in the absence of any proper police force.

Yet one reason they wear their masks is to protect their members from retribution from Zuwara’s powerful smuggling gangs, who have operated out of the port since the days of the Barbary pirates.

Their human cargo is merely a 21st century addition to a portfolio that has evolved over the centuries from spices and slaves through to guns, black market oil and bootleg cigarettes.

Yet while the people smugglers have enjoyed near impunity since Gaddafi’s fall, not everyone in Zuwara takes the cynical view that is purely Europe’s problem to deal with. On the contrary, the trade’s deadly consequences has horrified many locals, including some of the idealistic young activists who helped lead the revolution in 2011.

“I remember the first time I saw a corpse washed up on the beach – it was devastating, a very sad way to see a fellow human being,” said Ayoub Soufyan, 28, a founder of the Masked Men, who organised an anti-people smuggling street protest in July 2014. “We eventually took pictures of bodies lined up on the beach and turned them into posters, so that people could actually see what was going on, and they were outraged.”

“People only mention Zuwara because we are the only city that has openly admitted the problem. But if you don’t admit the disease, you’ll never find the cure.”

Still, the Men in Black bit off more than they could chew when they first tried to tackle the problem in late 2013. Not only did the smugglers they arrested simply bribe their way out of Libyan courts, they also found themselves responsible overnight for the welfare of thousands of migrants, whom the gangs often kept in appalling conditions. Among them were pregnant women and young children, some sent by their families alone.

“We had no idea of how to look after them, so we stopped,” said Mr Abza. “But then the gangs just became even stronger and more obvious, driving openly in the streets with cars full of migrants. It was like watching cocaine cartels in south America: they were buying nice houses and fancy cars, and showing off by eating in good restaurants, with pistols strapped in their waists. The message was: ‘you can’t stop us.”

Two months ago, though, it was the smugglers’ turn to push their luck. Yet another boat capsized, this time with some 189 bodies washing up on shore – so many that they had to be buried hastily in a mass grave on the city’s outskirts. The next day, the Men in Black arrested three alleged ringleaders, and while there is still no reliable court to put them before, they say a Rubicon has now been crossed.

“After that sad incident, we took a vow as a city,” said Sadiq Nanis, Zuwara’s deputy mayor, who is also involved in the grim task of collecting and identifying bodies that wash up on the beach. “We said this was never going to happen again.”

How easy it will be to keep that promise remains to be seen. Sceptics claim the Masked Men’s involvement is little more than a PR strategy, or that it will simply displace the trade to rival people smuggling hubs like nearby Zlitan, where 40 bodies were found just last weekend. Also yet to be convinced are EU officials, who have been in talks with the Zuwarans but have yet to offer any help.

Yet there is no doubting the sincerity of the likes of Mr Nanis, who has picked up some 550 bodies in the past 18 months alone. Lurid rumours now abound around town about whether local fish is still safe to eat, given what they might be feeding on.

“I tell you, after a while, this job kills you and you start to feel a bit emotionless,” Mr Nanis added. “But even now, whenever I see a body, I feel anger. I imagine who their father is, their mother, their wife or husband. I’ve seen hundreds now, but that anger is still there every time.”