You are here: Home / Mediterranean / Libyan jihadists now have deadly chinese landmines: the Type 84 makes an appearance in Benghazi 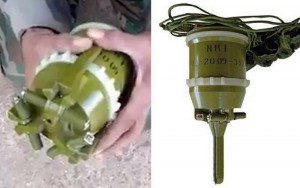 On Dec. 8, 2016, a social media account supporting the Libyan National Army — one of two main forces battling for control of war-torn Libya — published footage of an unused, Chinese-made Type 84 remotely-delivered anti-vehicle landmine along with a Type 122-15 ATML rocket, according to warisboring.com .

The rocket was apparently found in the Ganfouda district of Benghazi, in a neighborhood that the Tobruk-based LNA had seized from the Benghazi Revolutionaries Shura Council, an Islamist militia.

The footage apparently marks the first appearance of the Chinese mine in Libya since 2011 — and, more importantly, the first evidence that a Libyan Islamic group has gotten its hands on the munition.

The Type 84 mine is an air-dispersed landmine with an explosively-formed penetrator warhead that can penetrate up to 110 millimeters of rolled homogeneous armor.

The GLD220 variant of the Type 84 disarms itself after 72 hours — and also features a self-destruct function that can trigger between four and 72 hours after deployment. Once the rocket launches, a time fuse activates at a predetermined distance. The rocket’s head bursts, ejecting the mines, which then descend under parachutes.

During the descent, the three legs at the feet of the mines open downward to form a tip that pierces the ground. The mine is then armed.

The Type 84 is not a cluster munition, unlike the Type 81 which can deliver explosive submunitions. Hezbollah used Type 81s during the 2006 conflict in south Lebanon.

Still, “the Type 84 mine is extremely dangerous and should not be handled or disturbed, as it is equipped with a sensitive magnetic influence fuse that also functions as an inherent anti-disturbance feature,” wrote Mark Hiznay, a researcher in the arms division of Human Rights Watch.

“The magnetic influence fuse explodes the mine when it detects a change in its immediate magnetic environment. That change can result from a vehicle passing over the mine or a person approaching it while wearing or carrying a sufficient amount of ferrous metal, such as military equipment or even a camera.

“Additionally, given the sensitivity of the fuse, any change in orientation or movement of the mine may cause the fuse to function.”

The first use of the Type 84 landmine in Libya was reported by C.J. Chiversof The New York Times and confirmed by Human Rights Watch. The rockets were launched on May 5, 2011 in the port area of the city of Misrata by forces loyal to then-Libyan leader Muammar Gaddafi.

Two guards patrolling the port in a truck ran over two of the mines. One guard was seriously wounded in the blast. An international deminer was killed in Dafniya in March 2012 and two injured in November 2011 when they tried to defuse a Type 84 submunition.

The LNA Air Force is known to have used cluster munitionssince at least 2015 in its attacks on Islamist militia in Derna and Benghazi.

Since the current round of fighting broke out in Libya in 2014, civilians in eastern Libya have found themselves trapped between the LNA’s cluster bombs, indiscriminate Emirati air strikes and the Islamists’ dispersed landmines launched by Islamist militia fighters.