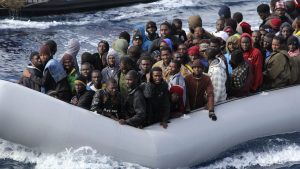 An agreement was concluded to activate the Libyan-Italian Joint Operation Room to combat irregular migration, like reported by lana-news.ly.

Shanbour said the agreement provided for activation of the joint room as an extension of previous Libyan-Italian agreements which would be executed by highly qualified Libyan elements, while the Italian side had undertaken to provide logistical facilities to enable them to do their job of securing the coastal area.

He said the activation of the agreement would be conducted from the headquarters of the General Administration of Coastal Security to liaise with its Italian counterpart for exchange of information on irregular migrants.

Shanbour said the agreement, which Fayez Al Saraj signed with Italian side did not provide for settlement of irregular migrants in Libya, rather to provide detention centres of the migrants with health care and other facilities with assistance from the Italian Government until they are returned to their countries.