You are here: Home / Mediterranean / Libyan Islamists threaten to help migrants to Europe in hired boats 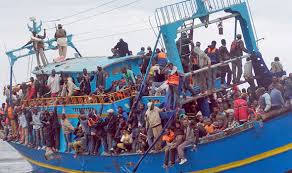 Libya’s self-declared Islamist government has issued a veiled threat to send “hundreds of thousands” of extra migrants to Europe if Brussels does not recognise it.

Officials say they could hire boats to send large numbers of Africans across the Mediterranean, massively adding to the numbers already reaching Europe’s borders.

The warning was made by a spokesman for Libya’s General National Congress (GNC) in an interview with London’s Daily Telegraph.

The Congress took control of Tripoli last year after fighting against forces loyal to the internationally-recognised government. A fortnight ago, both factions rejected the terms of a UN-brokered peace deal.

Jamal Zubia, the GNC’s foreign media spokesman, said Libya was spending tens of millions of dollars a year stopping migrants from crossing the Mediterranean, through the use of detention centres and repatriation programs. He said that if Europe continued to refuse to recognise the GNC’s authority, the government could reverse that policy.

“To be honest, I have advised my government many times already that we should hire boats and send them to Europe,” he said. “We are protecting the gates of Europe, yet Europe does not recognise us and does not want to recognise us. So why should we stop the migrants?”

Libya has long been a major transit country for migrants from sub-Saharan Africa, but the numbers have grown thanks to the security vacuum that followed the dictator Muammar Gaddafi’s fall in 2011. Last year, an estimated 170,000 arrived by boat from Libya in Italy. Between January and September this year the figure was 130,000.

Contrary to the popular impression, the Libyan government does not turn a complete blind eye to people-smuggling. Its Department for Combating Illegal Immigration employs 8000 staff and detains large numbers of migrants for entering the country illegally, as well as working with the International Organisation for Migration on voluntary repatriation programmes. In coastal ports, local officials run coastguard patrols and assist with the collecting of bodies when migrant ships sink.

However, the sheer number of migrants vastly outweighs the capacity of the authorities to deal with them, even though Libya spends about  $173 million a year on the issue. Many officials resent deploying resources at what they see as a European problem.

Mr Zubia stressed that his government had no immediate plans to stop its efforts to halt the flow of migrants, or to start hiring ships to speed their passage to Europe.

But his comments will be seen as a reminder to Europe that the GNC – the political wing of the Libya Dawn coalition, a range of Islamist groups that were involved in Gaddafi’s overthrow – has ways it can retaliate for the European Union’s refusal to recognise it.