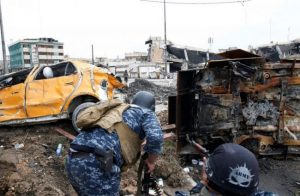 A Libyan senior leader of the Islamic State was killed in western Mosul on Sunday as Iraqi security forces sweep through districts on a new axis of operations taken last week, according to iraqinews.com.

He also said 40 IS members were killed in police bombardment on al-Zanjili district, and became close to the fifth of bridges linking western and eastern Mosul.

Jawdat added that other IS casualties fell down when a drone guided by militants mistakenly bombarded their gathering near the Grand Nuri Mosque in the Old City, an area besieged by the forces for weeks.

The developments come as Iraqi commanders say they recaptured Mesherfa and most of Haramat and 30 Tamuz (July 30th) districts which fall on the northwestern axis of operations, a new front which Iraqi forces resorted to having found it difficult to invade the Old City from the south.

Iraqi troops took over eastern Mosul from the Islamic State in January, and have been advancing through the west since mid February, recently claiming control over 70 percent of that region.