You are here: Home / Mediterranean / Libyan gov’t vows to fight “mercenaries” in south 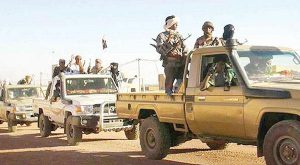 Libya’s UN-backed government announced measures to support its forces in the southern city of Sabha to fight so-called “mercenaries”, like reported by xinhuanet.com.

The government said in a statement that “any attack on the army’s camps and headquarters is an attack on the national sovereignty as a whole.”

“All Libyans will not give up their duty to defend the south, and will thwart all attempts aimed at creating a new demographic reality,” it said.

The government also called on the people in southern Libya to support the army.

The Libyan National Human Rights Commission on Monday confirmed that two civilians were killed and another was injured in armed clashes between rival tribes in Sabha, some 800 km southwest of the capital Tripoli.

Two days ago, Hamed Al-Khiali, head of the municipal council of Sabha, said the airport of Sabha was “occupied by an armed group that has nothing to do with Libya.”

Sabha is controlled by both the government’s forces and the eastern-based army led by General Khalifa Haftar.

The city has witnessed unprecedented insecurity due to the rise in crimes and kidnappings by armed groups, as well as frequent tribal clashes.