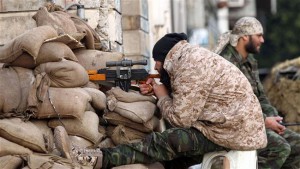 Libyan army forces, backed by air force and artillery, on Sunday killed seven Islamic State (IS) affiliated militants and captured nine others in the eastern city of Benghazi, according to a military source.

Major General Khalifa Haftar announced last week the launch of military operation “Doom.” Haftar said it is the final stage of operation “Dignity,” launched in May 2014 against extremist groups in the country.

The Libyan army, led by retired Major General Khalifa Haftar, has been engaged in a war against extremist groups for over a year in the city of Benghazi, the birthplace of the 2011 turmoil in which former leader Muammar Gaddafi was toppled.

Libya has slipped into a state of anarchy and insecurity since Gaddaif’s fall in 2011. The North African country is plagued with continuous clashes and escalating violence.