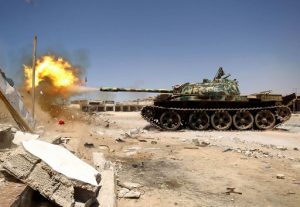 The Libyan National Army (LNA), commanded by Marshal Khalifa Haftar, has continued targeting Turkish forces in the country by bombing the military base inside Mitiga International Airport, like reported by aawsat.com.

For the second consecutive day, violent explosions were heard on Sunday in the vicinity of the base, east of Tripoli.

According to the LNA, Turkish forces fighting alongside Sarraj’s Government of National Accord (GNA) and their armed militias are using Mitiga as a permanent base for military operations.

“After failing to win the battle and losing their bases, the militias once again violated the international ceasefire and targeted residential areas and neighborhoods in Qasr bin Ghashir, breaching human rights laws,” the Division explained.

It pointed out that the militias seek to hold the LNA accountable for its actions, which are punishable by international law.

The LNA information office has released footage of what appeared to be an announcement of the participation of Tariq bin Ziyad Brigade in the battle to liberate Tripoli.

It pointed to the “LNA forces’ ability to carry out all the tasks assigned to them in a highly efficient and professional manner to defend the country and its sovereignty, and preserve its capabilities and gains.”

He said Sarraj’s GNA and Turkey are being secretive.

The Syrian Observatory for Human Rights (SOHR) has reported that the number of pro-Turkish factions killed in the Libyan battles rose to 117.

It quoted sources as saying that they were killed in the clashes on several fronts in Tripoli, indicating that about 150 fighters among those who headed to Libya, are now in Europe.

The SOHR also announced a rise in the number of those arriving in the capital to take part in the battles.