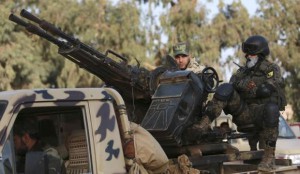 In a new strategic shift in its fight against extremists in Libya, the Libyan National Army has begun deploying fast-moving ground-troop units in a bid to counter the spread of insurgents throughout the war-torn country.

The army says that in addition to ground troops, the newly formed units also include military intelligence personnel and employ lighter vehicles and weapons than larger army units previously used.

An army spokesman told Asharq Al-Awsat the units are also working closely with local tribal groups in order to secure territory, much of it now lawless.

Speaking to Asharq Al-Awsat, Libyan military sources said the strategy, in place since May, had been effective in helping determine the location of Mokhtar Belmokhtar, the former military commander of Al-Qaeda’s North African branch, who was killed in a US airstrike in June in the eastern city of Ajdabiya.

The army is battling a host of different extremist groups in Libya, including the Islamic State of Iraq and Syria (ISIS).

A team of 20 soldiers, five commanders, and three military intelligence officials using light weapons and 4×4 vehicles instead of tanks had successfully helped oust a number of ISIS fighters from the city, also killing seven.

However, Abdul Karim said the army was still having difficulty fighting groups such as ISIS in the country due to their “continuing to obtain weapons and fighters via the sea, even until today.”

“[The extremists] are receiving support from the sea in full view of European fleets [in the Mediterranean],” he said, adding that there were “specific countries who are insisting on supporting terrorism in Libya.”