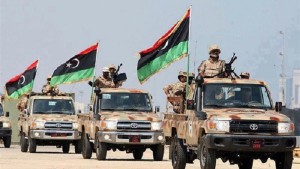 The Libyan army has announced “major success” in operations against militants in the eastern city of Benghazi.

The military captured a port used by militants for supplies and took control of Hlees area in downtown Benghazi, an army spokesperson said Sunday.

Three soldiers and 15 militants were killed in the clashes on Sunday, the spokesman said.

The army said it has also seized control of Ejdabia, some 150 km south of Benghazi. Local affiliates of the Islamic State (IS) have been attempting to occupy Ejdabia.

Media reports said fighting between army forces and militant groups in the past two months has killed 65 people and injured 140 others.

Libya plunged into turmoil in 2011 after the fall of Muammar Gaddafi, leaving a security vacuum that has been exploited by the IS and other extremist groups.

Since July 2014, the Libyan crisis has deepened further as two rival parliaments and governments started to fight for legitimacy.

A United Nations-brokered deal signed last December by representatives of various parties in the inter-Libyan dialogue called for a unity government based in Tripoli.

The sides have yet to agree on a lineup of the new government.