You are here: Home / Mediterranean / Libyan Army bombs Derna in preparation of liberating it 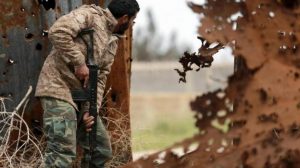 The Libyan National Army (LNA) announced that its forces have bombed sites belonging to extremist groups west of Derna, a stronghold of terrorist groups in the east of the country, in preparation for a major military operation to permanently liberate the city, like reported by aawsat.com.

“The sites were bombed in the south and west of the city by heavy artillery,” said a source from the army, which is led by Field Marshal Khalifa Haftar.

The third brigade of Battalion 321 released videos showing what it described as the “precision bombing,” which targeted extremist positions in Dhahr al-Hamr near Derna.

For his part, Colonel Younis Attia, the security director of Shahhat (west of Derna), called on all departments and centers in the province to be ready to support the military when it enters to liberate the city.

Meanwhile, the Libyan parliament, which is located in the eastern Libyan city of Tobruk, discussed in a meeting violations committed against the residents of Tawergha, including the prevention of their return to their city from where they have been displaced since 2011.

The media committee for the return of Tawergha accused militias belonging to the Government of National Accord (GNA), headed by Fayez al-Sarraj, of shooting displaced people in two camps in Qararat al-Qatf near Bani Walid.

A pro-legitimacy news agency in eastern Libya quoted Committee member Ali Diwan as saying that a number of people were injured in the incident.

For its part, the United Nations Support Mission in Libya said that UN High Commissioner for Refugees (UNHCR) has distributed blankets, cooking utensils, hygiene kits and sleeping mats to the displaced people of Tawergha.

UNHCR field teams and local partners are on the ground to provide emergency and urgent relief to some 5,000 displaced people from Tawergha, it said in a statement.