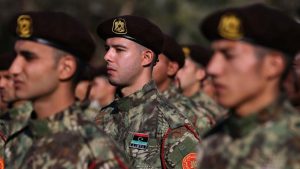 The Libyan National Army (LNA) announced the establishment of a new battalion under the name of “rapid intervention” but did not specify its functions, like reported by aawsat.com.

The army also continued to demine the city of Benghazi, east the country, and remove the corps of extremists after announcing its full control over the city last week.

Marshal Khalifa Haftar issued a decision on Monday to establish the battalion and appoint Lieutenant Colonel Emad al-Zwei as its commander, and he said it should follow the National Army’s “control body.”

The decision did not specify the nature of the battalion and its tasks, but military sources told Asharq Al-Awsat that it comes within the framework of the army’s readiness to move towards other Libyan cities to continue its operations to free them from the grip of extremist groups.

Meanwhile, the Libyan Red Crescent has recovered 17 corps of terrorists, who were killed during the army’s battles to free the areas of Sidi Ekhrebish and the Benghazi’s municipal hotel.

Spokesman for the LNA special forces Colonel Miloud al-Zwei said that the city of Benghazi is already under control of the army, pointing out that one of the terrorists committed suicide Sunday evening in the Qawarsha area west of the city.

He said the Special Forces asked the terrorist to turn himself in voluntarily, but he resorted to bombing himself.

The death toll from booby traps and landmines planted by terrorists in Benghazi has amounted to 197 military and civilian personnel over the past year while 27 experts have been killed in an attempt to demine some areas of the clashes, according to a statistic presented by a military official on Monday.

Abdul Salam al-Massmari, commander of the military engineering faction of the army, said that the army’s general command issued instructions to launch an awareness campaign through the publication of posters and guidelines in the areas that were liberated from ISIS.

Army forces began a large-scale sweep of the fighting areas days after the army declared full control of Benghazi, knowing that Haftar has announced the liberation of the city in July after three years of fierce fighting.