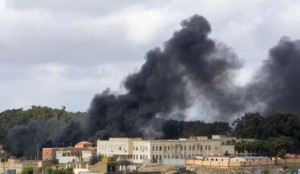 The Libyan Air Force launched a series of airstrikes against Islamic State of Iraq and Syria (ISIS) positions in the eastern city of Derna on Saturday, the stronghold of a number of extremist groups currently operating in the war-torn country.

In an online statement, which also included photographs, ISIS also said it had been targeted in Derna, though it maintained the strikes had been limited to its “Islamic Police” headquarters in the city.

Neither the source from the Libyan Air Force nor ISIS gave further details regarding any losses the group suffered in the city following the strikes.

Meanwhile, sources from the Libyan National Army told Asharq Al-Awsat on Sunday that forces from the militant Libyan Dawn group recently attempted to take over the Al-Watia Airbase, which lies 87 miles (140 kilometers) southwest of the capital Tripoli.

The sources said the advance on Al-Watia by Libyan Dawn had been blocked after fierce clashes occurred between the militants and army units in the region surrounding the base.

Libyan Dawn is a loose collection of militant groups allied to the country’s Tripoli-based Islamist-dominated parliament, the General National Congress (GNC) and its self-appointed cabinet.

Libya currently has two governments along with their allied parliaments. The House of Representatives, a rival to the GNC, and its government set up base in the eastern coastal city of Tobruk last year, after Libyan Dawn forces took over large parts of Tripoli in late August 2014 and reinstated the GNC.

The GNC was forced out of power earlier in the month after elections were held which brought the House of Representatives to power.

Each government–parliament also has an allied armed group: The Libyan National Army, consisting of remnants of Gaddafi’s army—and which includes the Air Force—is now allied to Tobruk, while Libyan Dawn has sided with the Islamists in Tripoli. Fierce battles have since raged between both groups for control of the capital and other parts of the country.

With two rival governments and parliaments, a plethora of militant groups with differing loyalties, and the entry of extremist groups like ISIS into the fray, the country has plunged into anarchy and its once-thriving oil industry has been left decimated.

Human trafficking has also thrived in Libya in the midst of the chaos, with the recent Mediterranean migrant deaths off the coast of Italy largely blamed on traffickers from the war-torn North African country.