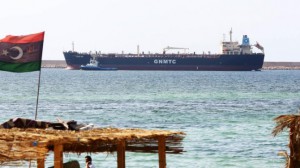 Libyan air force on Sunday bombed a Greek oil tanker off the Libyan coast, injuring some of its crew members and damaging a large part of it, said a source from the national army.

A fighter jet of the Libyan air force attacked the Greek oil tanker, Anwar 1, as it was docking off the shores of Sirte, some 500 km east of the capital Tripoli, for suspicion of carrying arms and ammunition to terrorist groups, the source told Xinhua on the condition of anonymity.

“Sirte is out of the control of the state. It is dominated by the Islamic State, IS affiliated militants and militias of Libya Dawn,” the source said, adding that “therefore, we consider any land and sea movements or actions toward the city suspicious unless such movements of actions are coordinated with the army.”

Meanwhile, the Libyan air force commander, Saqer al-Joroushi, confirmed their warplanes’ attack on an unflagged ship off the Libyan port of Sirte after it was warned several times.

Libya, a major oil producer in North Africa, has witnessed a frayed political process following the toppling of its leader Muammar Gaddafi during the 2011 political turmoil and now is deadlocked in a dogfight between the pro-secular army and Islamist militants.

In last August, the capital city of Tripoli fell into the hands of Libya Dawn, an armed Islamist coalition which has established its own government to confront the internationally recognized one, currently in exile in the eastern town of Tobruk.