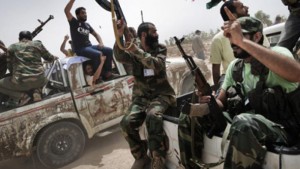 Violent clashes between Misrata’s Battalion 166 and fighters belonging to the Islamic State (IS) have continued for the fifth day running.

A spokesman for the Battalion 166, Khaled Abujazia, said that fighting involving heavy artillery was taking place at a number of downtown locations in Qaddafi’s former hometown and that two members of the battalion had been killed and five others wounded as it tried to dislodge the Islamists from positions held by them.

These include the Ouagadougou Hall, centrepiece of Qaddafi’s makeover of Sirte as a base for African Union and other pan-African gatherings, and the University of Sirte. Both are being bombarded by the battalion.

Meanwhile random missiles are reported to have fallen on a military housing area, the offices of Radio Free Sirte, a supplies centre and a local school.

Clashes are also reported taking place on the coastal road west of the town.

The two soldiers killed today have been named as Musa Abushalah and Belgassem Safar.