You are here: Home / Mediterranean / Libya: US orders Turkey to immediately withdraw all its troops (and Syrian mercenaries) 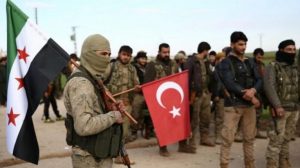 US Secretary of State Anthony Blinken stressed the need for the immediate withdrawal of Turkish troops from Libya, including all foreign troops and mercenaries.

Blinken made the demand yesterday during a ministerial conference that took place on the sidelines of the 76th UN General Assembly.

The Ministerial Conference on Libya was held with the participation of the countries of the Berlin Process, neighbouring African states along with Greece and Spain, which participated as observers.

In his statement, the US Secretary of State strongly supported the immediate withdrawal of all foreign troops and mercenaries from the country, not hesitating to directly name Turkey.