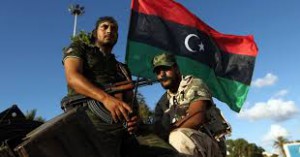 International pressure mounted Sunday on Libya to form a national unity government as the Islamic State jihadist group expands at the doorstep of Europe and the rest of Africa.

In Libya itself, prime minister-designate Fayez al-Sarraj met controversial army chief General Khalifa Haftar as part of a series of encounters to press the creation of a UN-backed unity cabinet.

The meeting came as African Union leaders at a summit in Addis Ababa called for a political solution in Libya to curb the spread of IS.

In Paris, French Defence Minister Jean-Yves Le Drian said IS could infiltrate the ranks of refugees using Libya as a springboard to reach Europe, adding that a unity government could help “eradicate” IS.

Libya has been in political turmoil and rocked by violence since the 2011 toppling of longtime dictator Moamer Gathafi.

Since the summer of 2014, the country has had two rival administrations, with the recognised authorities based in the country’s far east and a militia-backed authority in Tripoli.

The situation has been further compromised with the emergence of IS in the oil-rich North African country and a brisk business by people smugglers ferrying migrants to Europe.

The jihadist group, which controls swathes of territory in Syria and Iraq, has claimed several attacks and beheadings in Libya and last year captured the coastal city of Sirte.

In January, IS jihadist pushed east from Sirte in an attempt to seize oil terminals in Ras Lanuf and Al-Sidra, which lie in an “oil crescent” along the northern coast.

That same month it claimed responsibility for a January 7 truck bombing at a police school in Zliten, east of Tripoli, that killed more than 50 people, the deadliest attack since the 2011 revolt.

The international community has pressed Libya’s rival politicians to accept a power-sharing agreement it hopes will help to reverse IS’s territorial gains.

Sarraj’s official Facebook page said he met Haftar in the eastern city of Al-Marj on Saturday to assess “the opinions, fears and worries of influential sides in the crisis”.

Sarraj and Haftar discussed “finding a practical solution to the war in Benghazi”, Libya’s second city where Haftar’s forces have been fighting Islamists, it said.

It said Sarraj was seeking a “realistic” solution based on “realities on the ground” to reach a political consensus between all parties.

Sarraj is expected to propose a new government lineup, after the recognised parliament rejected an initial 32-member list last week.

Deputies also voted for the removal of an article from the UN-brokered peace deal signed in December that gives the Sarraj government the power to approve top security and military posts,.

The move was taken over fears that it will lead to Haftar’s ouster as demanded by the Islamist-backed Tripoli-based administration.

Haftar, 73, presents himself as Libya’s saviour in the face of jihadist expansion and launched “Operation Dignity” in 2014 against Islamists in Benghazi, cradle of the 2011 revolt.

In Paris, Le Drian told French television of the “urgent” need for a political solution to the crisis in Libya to help combat the spread of IS.

“Daesh is installing itself,” he said using the Arabic acronym for the IS group, adding that a government of national unity was the “only way to eradicate” the jihadists.

“I have been very worried about Libya since September 2014. They are there, nearly 300 kilometres from the (Italian) coast, and they are spreading,” said Le Drian.

In Addis Ababa, African Union leaders discussed the Libya turmoil and its repercussions.

“This is something that concerns us all,” AU Peace and Security Council chief Smail Chergui told reporters, adding effective action could only be taken “if we have a government in place”.

He said AU presidents had decided to relaunch the “High Level Contact Group on Libya” — a team of five heads of state — “to lend support to the ongoing efforts”.

The United Nations, in a December report, estimated that between 2,000 and 3,000 IS fighters are posted in Libya, including 1,500 in Sirte, which was Kadhafi’s hometown.