You are here: Home / Mediterranean / Libya urged to act against Islamist armed groups 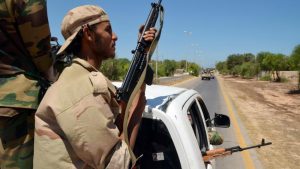 The United Nations (UN) has called on Libya’s internationally recognised government to crack down on armed groups obstructing the work of state institutions in the chaos-wracked country, like reported by gulftoday.ae.

The UN Support Mission in Libya (UNSMIL) on Sunday night expressed its “strong condemnation of the violence, intimidation and obstruction to the work of Libya’s sovereign institutions by militiamen.”

It called on the UN-backed Government of National Accord to “prosecute those responsible for these criminal actions.”

The GNA’s military and security institutions have failed to place limits on the powerful militias that sprung up in the turmoil that followed the 2011 ouster of dictator Muammar Qadhafi.

Several state institutions, including those in Tripoli, have been regular targets of harassment and intimidation by armed groups technically operating under the GNA’s interior ministry.

Members of militias “nominally acting under the Ministry of Interior of the Government of National Accord are attacking sovereign institutions and preventing them from being able to operate effectively,” UNSMIL said.

Last week, the GNA’s National Oil Corp. said men from the interior ministry had forced their way into the headquarters of Brega Petroleum Marketing Company — a distribution outfit — to “arrest” its chief.

The Libyan Investment Authority, the GNA-managed sovereign wealth fund, recently moved from its downtown Tripoli office to a more “secure” location after threats from militiamen against its employees.