You are here: Home / Mediterranean / Libya: Thinni tells Russians he needs arms and airstrikes against IS 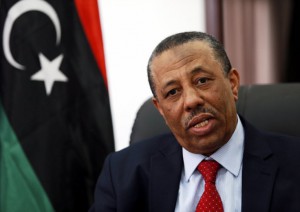 Prime minister Abdullah Thinni has once again accused Qatar and Turkey of trying to force political Islam on an unwilling Libya, whose voters widely ignored candidates sympathetic to the Muslim Brotherhood in the June 2014 election.

In an interview with the Russian publication Sputnik  Thinni said: “There are states wishing to impose political Islam on us. Turkey and Qatar, for example, are attempting to impose it on Libya despite the people’s rejection.”

Thinni however made a point of saying that he was not opposed, as such, to the existence of Islamic political movements. Other parties could work with them as an integral part of the Libyan political landscape.  But he warned against political Islam seeking complete dominance.

“Qatar and Turkey have had that experience in Egypt,” he said, “where they strongly supported the Muslim Brotherhood”

In the interview datelined Tobruk, Thinni told Sputnik that the government wanted outside airstrikes on IS positions, not on its political rivals. It did not consider such foreign intervention to be a violation of Libya’s sovereignty.

Thinni also renewed his plea for the outside world to provide arms and ammunition to his internationally-recognised government. “The international community helped us overthrow the [Qaddafi] regime, but has not helped in building a new state” he said.