The civil war that has been raging in Libya since 2011 is, in many ways, a proxy war pitting Qatar and its Muslim Brotherhood allies against the United Arab Emirates (UAE) and Saudi Arabia, like reported by qantara.de. 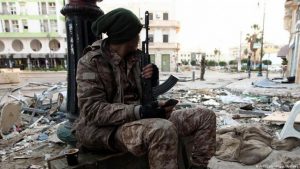 The Qatari-Emirati rivalry, which became front page news earlier this year when Saudia Arabia and its allies severed diplomatic ties with Qatar, has been the significant factor in the continuation of the current Libyan civil war, much more so than nationalistic or Islamist ideologies.

Qatar and the UAE are both punching above their weight in the conflict because, unlike in Yemen or Syria, the role of the United States or other major powers is somewhat muted.

At stake for both Gulf monarchies is influence in post-war Libya as well as economic opportunity. The country is home to some of the last significant under-explored oil and gas basins in the Middle East. Outside the oil sector Qatar has financial deals with Libya that date back to the Gaddafi era. The Emirates have also sought controlling positions in the Libyan financial sector and were also early investors in the country.

Chaos of the three coalitions

After disputed elections in 2014, Libya has once again descended into chaos with numerous factions. These include Berber militias, IS terrorists, repentant former members of Gaddafi′s military and many other factions. Over the last three years, however, Libyan politics have been defined by three large coalitions, each claiming to be Libya′s legitimate government.

The General National Congress is largely Muslim Brotherhood-influenced and is supported by Qatar. Conversely, the UAE along with Saudi Arabia now support General Khalifa Haftar and his Libyan National Army (LNA). The LNA claims to represent Libya′s House of Representatives, a rival government based in Tobruk.

Both of the above factions pay lip service to the Government of National Accord, the body recognised by the United Nations as Libya′s legitimate government. Yet both sides also have other allies too. Egypt also supports Haftar and in the past the General National Congress has received support from Turkey.

Qatar has long been involved in Libyan politics and had ties to the Islamist opposition since the Gaddafi era. When the Arab Spring uprisings of 2011 began, it supported the Muslim Brotherhood, which was the best organised political force in several Arab states.

Qatar was the first country to recognise the Libyan rebels and had begun sending them arms early in 2011 as they fought to topple Gaddafi. Media reports also suggest that Qatari special forces were deployed to Libya and at least some Libyan rebels received military training in Qatar.

The Emirates also sent weapons to rebel groups early in the conflict but, failed to build lasting ties. Instead the Emirates turned to General Haftar, a supposed former CIA asset who as recently as 2011 was living in exile in Northern Virginia.

In May 2014, Haftar launched a military movement to create a unified Libyan National Army (LNA) and to eliminate Islamic extremists (Haftar′s definition of extremists includes many whom others would consider moderates). This moment set in stone the Qatari-UAE rivalry, each has now officially backed clearly opposing sides in the Libyan armed conflict. A month later Bahrain, UAE and Saudi Arabia pulled their ambassadors from Qatar′s capital Doha, the diplomats did not return for eight months.

Haftar is perhaps the ablest military commander Libya has ever produced. He makes little secret of his neo-Gaddafi ambition to rule the country.  Personality traits aside, his rapid rise has been accelerated by Egyptian and Emirati airstrikes in support of the LNA.

The continual airstrikes increasingly suggest an escalation of the conflict in a conventional sense. A once semi-secret activity is now being conducted in the open.

Qatar did not respond militarily to support its clients. Even if it wanted to, Libya is beyond the operational range of Qatari aircraft. Even the 24 longer-ranged Dassault Rafale fighter jets Qatar has ordered from France could not attack Libya without access to access to friendly airbases or mid-air refuelling.

In any case, diplomatic relations soon returned to normal in the GCC and on the surface Gulf politics seemed calm, with Qatar even joining the Saudi-led military intervention in Yemen.

So much shifting sand

However, in Libya, tensions between the two countries continued unabated with the Emirates and Egypt increasing their military support to Haftar in recent months.

This was apparent in the most recent Egyptian bombing campaign in Libya. Though it used the May 26 attack on Coptic Christians as a pretext, the Egyptian government acknowledged its new bombing campaign was not aimed at the perpetrators of that attack per se. Instead the Derna Mujahideen Shura Council, an Islamist group, bore the brunt of the campaign. The group was an impediment to Haftar′s efforts to consolidate control of the country and according to Arab press reports, the group has also received support from Qatar.Still isolated and with little options, Libya may prove one place where Qatar chooses to strike back at the UAE.

The shifting sands of Libyan politics mean that Haftar could easily find himself on the defensive.  Haftar′s LNA is not a modern army, but a coalition of militias whose allegiances could quickly change. Haftar′s weakness is Qatar′s strength. Qatar can magnify the scale of its financial involvement with its proxies and provide them with public relations support though its media outlets, especially Al Jazeera.

Either way it suggests that the war in Libya is likely to be a long one.

As Westerners continue to watch events in Syria and Yemen, they should pay more attention to events in Libya where Gulf tensions may most likely lead from civil war into war.