You are here: Home / Europe / Libya: the Facebook smugglers selling the dream of Europe 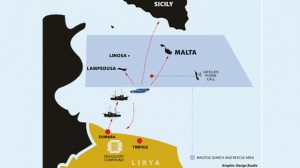 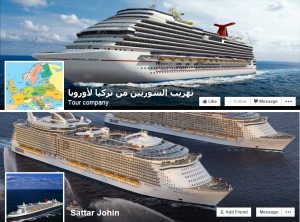 Across the Mediterranean, people smugglers are advertising their services on Facebook, promising safe passage to migrants desperate to reach Europe. Their pages offer a glimpse into a smuggling network that spans three continents, generates hundreds of millions of dollars, and has become, in effect, an alternative asylum service for the EU.

This is not an ad from a travel brochure. It’s a Facebook update posted by a people smuggler, Abdul Aziz, from the Libyan port of Zuwara on 21 April. Abdul Aziz is just one of hundreds of smugglers now using social media to promote their services to migrants and refugees trying to reach Europe.

Their pages advertise everything from fake documents to safe passage by land, air, or sea. Many are illustrated with photos of luxury cruise liners or crisp new passports, and include package deals – “Kids go free” is a popular offer – as well as glowing testimonies that purport to be from migrants who have made the journey.

But behind the glib promises and the slick online communications is a ruthless real-world web of smugglers and con men who thrive on the vulnerability of the migrants.

This web extends not only across the Mediterranean and the Middle East but deep into sub-Saharan Africa. Abdul Aziz alone claims to have agents in “almost every Arab state” and says “if people can’t get here to Libya, I have legal and illegal ways to get them into the country.”

The network that links a boat-runner like Abdul Aziz to a passport forger in Istanbul or a truck driver in Eritrea is an underground, ever-shifting configuration of personal contacts, criminal gangs, and one-off business deals that runs across national borders and is almost impossible to police.

The adaptability of this system only makes it more efficient: last year some 220,000 migrants crossed the Mediterranean, most leaving Libya in smugglers’ boats before being rescued at sea by the Italian coastguard or navy. Since the start of 2015, another 35,000 have reached Italy. More than 1,800 have drowned in the attempt.

There is nothing new in this. African migrants have been sailing from Zuwara for at least 30 years. But the proliferation of Arabic-language smuggling pages on Facebook reflects a surge in demand from Syrian and other Arab migrants since the uprisings of 2011, as well as a growing confidence among the smugglers themselves, many of whom post their mobile phone numbers online or field enquiries via online messaging apps.

Abdul Aziz, who spoke to the BBC via Skype, said that between 10 and 20 people contact him through his Facebook page every day. “Until 2012 we didn’t use social media at all,” he said. “Now, it accounts for between 30% and 40% of my business.”

The collapse of the Libyan state has also emboldened the smugglers, allowing them to promote themselves online without fear of arrest. Abdul Aziz laughed at the suggestion that his Facebook page might attract the attention of the authorities. “What authorities? There aren’t any authorities. There isn’t even a regime. There’s nothing.”

Giampaolo Musumeci, an Italian journalist who has written a book about North Africa’s smuggling gangs, sees their growing social media presence as “part of the marketing operation for the biggest illegal travel company in the world.”

According to Musumeci, this “company” made something between 300m and 600m euros (£235m-£470m; $215m-$430m) last year from those trying to get into Europe, and now constitutes an unofficial asylum service for people whose lives have been derailed by poverty, chaos, and war.

“What I’m selling,” a Pakistani smuggler in Italy told Musumeci, “is the dream of Europe.”

For many of those who arrived in the EU last year, it’s a dream that could not be realized through legal channels.

Take Ayham al Faris, a Syrian translator and anti-Assad campaigner who fled his country in fear for his life in October 2011. Before he left, Ayham tried to apply for a visa from the French and Austrian embassies in Damascus. He got nowhere. Later, after he had reached Turkey, Ayham approached the German, Australian, and Bosnian embassies with the same request. “They didn’t even say, ‘We don’t have programmes for you, we can’t give you a visa now,’ or something like that… They just say, ‘Send us an email,’ but when I send them my email they just throw it away.”

Faced with this wall of bureaucratic indifference, Ayham made his own way into Greece, where he used Facebook to contact a Syrian smuggler called Hafez. “He said he can take me wherever I want, no problem, it’s easy for him. The most important thing is that you have your money in your pocket.”

Despite the sales patter, Hafez failed to get Ayham out of Greece. Eventually, Ayham bought a fake passport from another smuggler and, at the 11th attempt, got on a flight to Paris. He has now been granted asylum in the Netherlands.

It’s a case that illustrates the crux of the problem: people smugglers are responding to a demand for asylum that Europe’s politicians are unwilling to meet. As long as this situation persists, says Musumeci, the smugglers will always find a way into the fortress.

“They’re thinking about how to get into Europe 24 hours a day… They communicate. They stay in touch. They change routes… one of these guys told me, “We study Europe, we study the laws, and the more you close the borders the more money we’re going to make.'”

New EU proposals to distribute migrants across member states and break up clandestine networks might help to reduce people smuggling within Europe. But Musumeci says it will do nothing to stop the boats coming across the Mediterranean. Dealing with that, he argues, will require a whole new level of engagement with the political turmoil in parts of Africa and the Middle East.

“Migration is going to force us to deal with these international issues… We need to focus on Libya, Eritrea, Somalia, Syria. It may sound naive, but it’s the only way to stop the influx… We’ll never stop this just by closing the doors. I’ve talked to dozens of migrants, and these people are willing to die to get into Europe.”

Despite the obvious difficulties, European countries are still trying to solve the problem at the level of policing. Europol, the EU’s law enforcement agency, recently launched an intelligence program, JOT Mare, which is supposed to disrupt or dismantle the smuggling networks that are bringing so many migrants across the Mediterranean.

A spokesperson for Europol confirmed that their agents will look at the online presence of the smugglers: “JOT Mare is focussing on all modi operandi used by facilitators of irregular migration in the Mediterranean Sea, including the use of social media.”

He conceded, though, that “Europol has no operational cooperation agreement with Libya” – the point of departure for the vast majority of migrants.