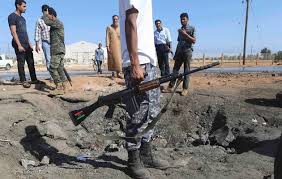 An army soldier was killed and seven others injured in a suicide attack in eastern Libya on Tuesday, military and medical sources said.

A suicide bomber blew himself up near an army checkpoint in the town of al-Gubba, Col. Saad Yacoob, an army commander, said.

Some of the wounded are in critical condition, a medical source at al-Gubba hospital said.

Al-Gubba is located some 70 km east of the city of Darna, a safe haven of Islamic State (IS) militants. The national army has been besieging the city for months in an attempt to regain control.

Libya has been suffering a security vacuum since the downfall of Muammar Gaddafi’s government in 2011. The country is plagued with continuous violence and armed attacks.