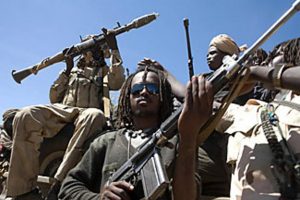 Sudanese rebels killed six Libyan National Army (LNA) soldiers and captured another near to the Jaghboub Oasis, close to the Egyptian border, like reported by libyaherald.com.
Initially it was thought the so-called Islamic State was the attacker, but now it is understood the Sudanese Justice and Equality Movement (JEM) were culpable.
The seven soldiers were part of the LNA’s 106 and 501 desert patrol brigades, and effectively border guards. The six bodies were found rotting in the desert and the other LNA fighter is missing, presumed abducted.
They were named as Ibrahim Al-Barasi and Salah Al-Barasi from Beida, Muftah Al-Barasi from Marawa, Nasser Al-Qut’ani and Saqur Al-Qut’ani from Um Al-Rizim. The identity of the final dead LNA soldier is unconfirmed and Hisham Al-Barasi from Beida is the missing member.
In late October 2016, 13 members of JEM were killed near Jaghboub in clashes with a Kufra-based Salafist brigade supportive of the LNA.
On 23 September 2016, six Libyans were kidnapped south of Jaghboub by JEM while they were on a bird-hunting tour. Initially, JEM demanded LD 2 million but this was negotiated down to half a million LD.
JEM are typically described as mercenaries, willing to work with anyone who will pay them and let their group move freely. However, pictures have emerged of JEM fighters with notable figures in the Islamist-led Benghazi Defence Brigades including a senior commander nicknamed Al Nahla or ‘the bee”. Others are seen as supportive of the LNA.
It has also been rumoured that JEM were in the Wershefana area alongside pro-Qaddafi fighters.
The UN Libya Experts Panel final report presented to the Security Council in June 2017 revealed an immense presence of foreign groups who contributed to an escalation of violence in the country. This included JEM and the Sudan Liberation Army. Also noted were Chadian groups such as the Front pour l’alternance et la concorde au Tchad (FACT), Conseil de Commandement Militaire Pour le Salut de la Republique (CCMSR) and Rassemblement des forces democratiques (RFC).