You are here: Home / Europe / Libya stops boats packed with hundreds of migrants leaving for Europe 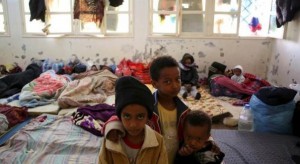 Libya has stopped several boats packed with Africans trying to reach Italy’s shores in the past three days, detaining more than 600 immigrants, a security official said according LibyaNewsToday.

The North African country, gripped by violence and a breakdown of state authority four years after the ousting of Muammar Gaddafi, has turned into major hub for human traffickers smuggling African emigrants by boat to Italy.

As many as 900 people may have died on Sunday off Libya’s coast when their packed boat capsized as they were trying to reach the Italian island of Lampedusa.

More than 36,000 have tried to cross the Mediterranean this year, the U.N. says, mostly using Libya as their launch pad, and nearly 1,800 are feared to have died in the attempt.

Libyan security forces detained on Tuesday around 70 Africans in Tripoli where they were waiting for smugglers to put them on a boat bound for Lampedusa, a senior immigration official told Reuters in Tripoli.

At least two boats, one packed with some 250 people from Senegal, Ghana and Ethiopia and other African nationalities and another one with Ethiopians and Eritreans on board, were stopped in the past three days after sailing off from Libya, he said.

The European Union helped in the past to train and equip Libyan coast guards, but a worsening security situation has forced foreign training staff to leave the country.

A self-declared Libyan government controlling Tripoli has appealed to foreign countries to help it fight human trafficking but European powers are boycotting the administration which took power after an armed group seized the capital in August.

World powers only recognise premier Abdullah al-Thinni who has been based with his cabinet in the east since losing control of the capital last summer.

On Monday, the European Union proposed doubling the size of its Mediterranean search and rescue operations after a decision to scale back naval operations last year appeared to have increased the risks for migrants without reducing their numbers.