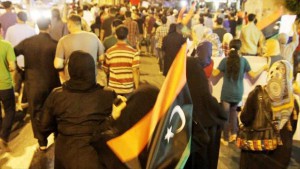 At least six people were killed and 35 others were injured Friday when mortar strikes targeted a peaceful demonstration in Libya’s Benghazi, a medical source told Anadolu Agency.

Protesters had gathered to speak out against the UN-held peace talks, which recently suggested  establishing a national unity government.

The UN Support Mission in Libya (UNSMIL) condemned the “terrorist attack” on Friday.

“UNSMIL calls on Libyans to reject violence as a means to settle political differences and stresses that peaceful expression of political views is one of the basic rights in a free society,” the mission said.

Libya descended into chaos and bloodshed following the ouster and death of strongman Muammar Gaddafi in 2011.

In the four years since, the country’s stark political divisions have produced two rival seats of government, one in Tripoli and one in Tobruk, each of which boasts its own political institutions and military capacities.