You are here: Home / Analysis / Libya: significant risk of becoming the new home of the Islamic State’s caliphate 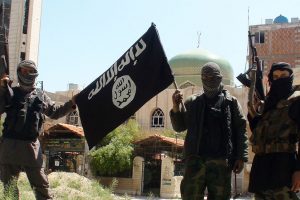 Libya, located a few hundred miles from the European coast, is facing a “significant risk” of becoming the “new” home of the Islamic State’s “caliphate,” a London-based expert from the Chatham House think-tank’s Royal Institute of International Affairs cautioned in an editorial published by the Dallas Morning News on Sunday.
Frank Kryza wrote:

“Boots on the ground” is a phrase rarely used by the Trump Administration. And with good reason: 6,251 American soldiers have been killed since 2001; some 45,170 have been wounded. That is a heavy price. We are already too involved in combating ISIS in Syria and Iraq. But if we do nothing, Libya will cease to exist as a country. Imagine, if you can, an Islamic caliphate on the shores of the Mediterranean Sea not far from Italy. It is a grim vision.

Kryza’s warning came as suspected fighters from the Islamic State, or ISIS, killed four people and wounded seven in central Libya on Sunday, according to Nigeria’s Punch newspaper.

Soon after U.S.-backed forces pushed ISIS out of its former stronghold in the coastal Libyan city of Sirte, once considered the group’s largest bastion outside Iraq and Syria, American and Libyan officials warned about a potential resurgence of the terrorist group, noting that the jihadists were regrouping elsewhere in Libya, namely the desert valleys and inland hills southeast of the country.

In April, the Congressional Research Service (CRS) cautioned that ISIS remains a “potent” menace in Libya.

Kryza, who serves as Tunisia’s honorary consul resident in Dallas, pointed out on Sunday that Libya’s descent into chaos following the U.S.-backed overthrow and execution of dictator Muammar Gaddafi in 2011 is providing a fertile ground for ISIS to flourish.

He said in the editorial:

There is a significant risk that Libya will become the new caliphate, the long-sought Islamic State. Since President Barack Obama’s war in 2011, the Arab Spring that killed Col. Moammar Gadhafi, Libya’s brutal and erratic ruler, chaos in Libya has increased. Libya has become a safe haven for leaders of ISIS fleeing ineluctable defeat by American forces in Iraq and Syria. What is coming is unimaginably worse than Gadhafi. The decline of Libya, the 16th largest country on the planet, worries the Pentagon.

ISIS has already captured some parts of oil-rich Libya, according to the Chatham House expert.

Kryza attributed the deteriorating security conditions in Libya to the U.S.-backed overthrow of Gaddafi.

In his memoirs, Obama describes Libya as likely his greatest regret, noting “I did a little too much counting on other countries to help support government formation in Libya and now it’s kind of a mess.”