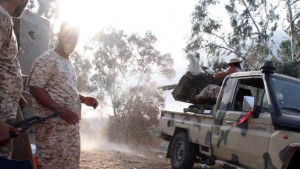 Libyan officials say a rival jihadi group has driven an ISIS affiliate from most of its eastern stronghold of Darna in fighting that killed 39 militants on both sides.

The officials, speaking on condition of anonymity because they are not authorized to brief reporters, said Thursday that at least 26 ISIS fighters were killed the night before when the Shura Council of Jihadis attacked the group in the coastal city, where ISIS gained its first foothold in Libya last year.

The Council said the push Wednesday night had driven the last ISIS remnants from the city center. It plans to pursue the remaining ISIS fighters, who have fled to the nearby mountain suburb of Al-Fatayah.