You are here: Home / Mediterranean / Libya: Serraj gets boosts from Benghazi and Cairo 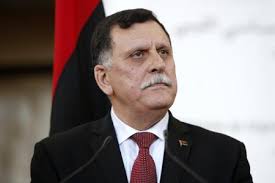 In a major political development, Faiez Serraj, the prime minister-designate of the internationally-supported Government of National Accord, has won the approval of a key group of Benghazi members of the House of Representatives (HoR), following a meeting with them in Cairo yesterday.

The group comprised Ziyad Daghim, Essam Al-Jihani and Essa Al-Araibi, who last October that he would support the GNA but only if it agreed not to remove Khalifa Hafter as head of the armed forces. Also present were one of Serraj’s two deputy prime ministers for eastern Libya, Ali Al-Qatrani.

The Libya Herald has been informed that at the meeting the position of Hafter was not an issue. The main demands of three HoR members were that the new government give its complete support to the existing Libya National Army (LNA), assuring it of funding, supplies and weapons in the fight against terrorism, plus unlimited funding for the reconstruction of Benghazi. They also demanded that, in addition to a third of government ministers coming from each of the country’s three historic provinces of Tripolitania, Cyrenaica and Fezzan, all ambassadors be appointed on the same basis.

In what appears to be a coordinated move, the demands largely mirror those in a statement yesterday from eastern mayors and elders and in discussions by a number of eastern Libya tribes who met yesterday in two separate meetings. However, an additional condition for supporting the GNA was that Hafter remain as head of the LNA.

In one of the tribal meetings, in Ain Lali south of Beida, HoR president Ageela Saleh who was present was told that providing that were the case, he had to support the GNA.

It is thought the development will strengthen Serraj’s position considerably.

Meanwhile, back in Cairo, in another boost for him, Serraj officially met with Egyptian president Abdel Fattah El-Sisi who congratulated him on his appointment and told him that his government would have Egypt’s fullest backing, especially in the fight against terrorism and the re-establishment of security. The Egyptian president also stressed the importance of the Libya army and police and ensuring that the HoR remained a cohesive body.

It was Serraj’s first visit to Cairo since the signing of the Libyan political Agreement in Skhirat on 17 December.

Serraj has also been in touch with the Italian and German foreign ministers, Paolo Gentiloni and Frank-Walter Steinmeier who likewise congratulated him on his formal appointment at Skhirat as prime minister-designate and assured him of their countries’ support to restore stability in Libya.

In a related development, Libya’s current foreign minister Mohamed Al-Dairi has also given his strongest support so far to the GNA. Almost all Libyans backed it, he said in a TV interview. Political Islam, he added, had almost no public backing in the country but those who advocated it were welcome to join in the national reconciliation process.