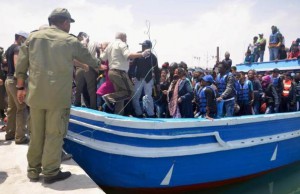 Libya’s internationally recognized government said on Thursday it will send a delegation to discuss with European Union authorities proposals for controlling migrant smuggling, saying its territorial sovereignty was a “red line” in any operation.

With two rival governments and their armed factions battling for control, the North African state is in chaos and has no real naval force to tackle an increasing flow of illegal migrants smuggled from its coast to Europe.

EU ministers on Monday approved a naval operation to try to halt the stream of migrants, though it will be limited for the moment to intelligence gathering because it has no authorisation from the United Nations.

Securing consent from Libya, where both rival factions are wary of international missions in their waters, has been a major concern for European powers who plan to use submarines, aircraft, ships and drones in their operation.

“A ministerial committee will visit the EU to inform them of the solutions proposed by the government. The government has its own alternatives,” government spokesman Hatem Oraibi said. “Libyan sovereignty and territorial waters and airspace are a red line.”

The air force commander of the recognised government earlier warned European countries that any vessels entering Libyan waters without permission would be targeted by air strikes.

The internationally recognised government has operated out of the east since last summer when a force called Libya Dawn took over the capital Tripoli, declared its own government and reinstated the old parliament in a challenge to the elected House of Representatives.

The United Nations is trying to broker a ceasefire and power-sharing deal between the two factions as Western governments worry Libya is becoming a safe haven for militants as well as for smugglers ferrying illegal migrants into Europe.