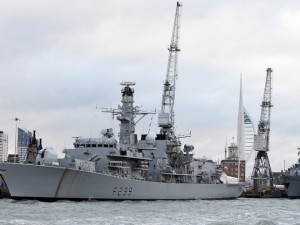 A Royal Navy warship is being offered to the EU in the fight against people smugglers in the Mediterranean Sea as the operation to target the criminal gangs is stepped up.

HMS Richmond could be sent to the waters of the coast of Libya to stop the human traffickers who are risking the lives of refugees by taking them on the perilous journey to Europe by boat.

More than 2,000 people have died trying to make the crossing so far this year, according to the International Organisation for Migration, and Defence Secretary Michael Fallon said the crisis must be tackled “at source”.

The navy’s HMS Enterprise is already stationed in the Mediterranean and the offer of another frigate to go after criminals will be officially made at an EU force generation conference later today.

While HMS Richmond, which has a special surveillance system allowing it to cover vast areas, will be able to help in search and rescue missions, its primary role will be to board and seize vessels in the southern Mediterranean, the Ministry of Defence (MoD) said.

Mr Fallon said: “The vital work of HMS Bulwark, HMS Enterprise and our Merlin helicopters shows the UK’s commitment to tackling the refugee crisis at source.

“The Royal Navy has rescued thousands of people from peril but we’ve been clear we have to tackle the gangs behind this, which is why it’s important the mission moves to the next phase.

“We will not stand by and let this smuggling trade escalate; we will confront this criminal activity which risks the lives of innocent people every day.”

HMS Enterprise was sent to replace HMS Bulwark, which saved 3,000 lives in the Mediterranean, in July as the EU’s naval operation began to move towards a focus on tackling smugglers.

Last month the ship was involved in what the MoD described as the largest operation to take place in a single day of the mission.

When more than 20 vessels with migrants on board issued distress calls HMS Enterprise was able to take aboard 453 of the 4,400 saved off the coast of Libya, as teams from several other European countries also helped with the rescue.