You are here: Home / Mediterranean / Libya rivals get closer to peace deal 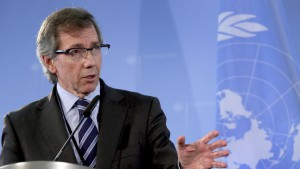 Libya’s rival authorities have edged closer to forming a unity government as part of a peace deal for the war-torn country, its UN envoy said on Sunday.

“After long hours of discussions, we have reached…a consensus on the main elements,” Bernardino Leon told reporters in Skhirat near the Moroccan capital, where talks resumed last week.

Libya has two rival administrations − the General National Congress (GNC) in Tripoli and an internationally recognised government in the east.

Points raised by the GNC have been introduced into the latest draft, Leon said, calling on the internationally recognised government to accept the amendments.

GNC representatives will submit the updated agreement to their parliament, said Leon.

“They are going to come back…with their names to propose candidates for the national unity government,” he said.

The internationally recognised parliament earlier this month adopted a list of candidates for a unity government.

Leon’s plan calls for a unity government deal by Sept.20, ahead of the UN General Assembly, with the government coming into force a month later.

“While this is encouraging, it is now urgent to bring the talks to a swift conclusion and close the deal,” Mogherini said on Sunday of the latest development.

“I expect all participants will engage constructively in the interests of all Libyans to finalise an agreement in the coming days,” she said, adding that Leon had the “wholehearted support” of the European Union.