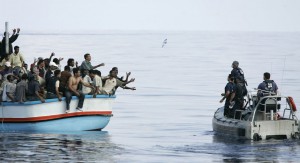 A rival government controlling western Libya has asked Arab and European countries to hold a regional conference this month to help the North African country stem a flow of migrants, a minister said on Thursday.

Libya has turned into a major transit route for migrants fleeing war and poverty. As two governments fight each other, smugglers exploit a security vacuum to bring Syrians into Libya via Egypt or nationals of sub-Saharan countries via Niger, Sudan and Chad and ship them by boat to Italy.

Two boats packed with migrants sank off the Libyan coast in the past week, killing around 200 people.

“We call for a regional conference at the end of September … to stop this tragedy,” said Mustafa Laqlaib, justice minister in a Tripoli government not recognised by world powers.

World and most Arab powers only deal with Libya’s official government based in the east since losing a year ago the capital Tripoli to an armed group, which set up a rival administration.

But the eastern-based government, working out of a remote city, has no control of western Libya from were boats are launched due to its proximity to the Italian island of Lampedusa.

The Tripoli government has asked the European Union for help to train and equip its navy which was largely destroyed during a 2001 uprising that toppled Muammar Gaddafi. But all cooperation was frozen in 2014 as the European Union has boycotted Tripoli officials.

The United Nations has been hosting peace talks between the two administrations to form a unity government but a Tripoli-based rival parliament, facing divisions, has so far refused to sign a preliminary agreement.

The migrants pay thousands of dollars for the land and sea passage with smugglers often beating and torturing them to press for more money for the final leg of the trip by sea in unseaworthy vessels, rights groups say.