You are here: Home / Mediterranean / Libya: Refusing to act against terrorism will have serious implications for international peace and security 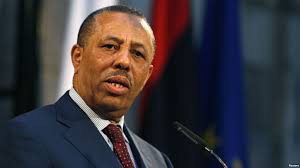 Prime Minister Abdullah Al-Thinni has rounded on the international community, accusing it of a “suspicious silence” over what he described as the upsurge in violence from IS terrorists in Benghazi, Sirte and Derna.

He said, in a statement issued yesterday, that international organisations that claimed to defend human rights had been notably silent and the outside world was doing nothing to hep tackle the terrorists.

“We hold fully responsible UNSMIL, the United Nations and the Security Council for the daily loss of innocent civilians lives, “ said Thinni, “because they are not serious about taking measures that will support the legitimate institutions in Libya and most importantly the Libyan army in its war against terrorism”.

Thinni added that the crimes against humanity in Libya and the expansion of the “criminal gangs” who commit them, constituted an imminent threat not only to Libyans but to neighbouring countries.  He warned: “Refusing to act will have serious implications  for international peace and security”.