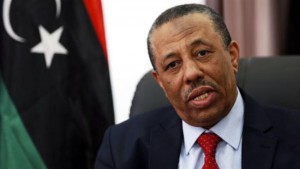 “Libya welcomes cooperation with all countries, provided with mutual respect and non-interference in the country’s internal affairs,” Al-Thanni said.

His statement came after some reports said European countries are planning to restart military operations in Libya as soon as a unity government is formed.

The reports said that as Libya has become a focal point of illegal immigrants wanting to cross into Europe, European countries are planning to organize a military operation to fight illegal immigration in the Mediterranean.

Libya, a major oil producer, has witnessed a frayed political process after its former leader Muammar Gaddafi was toppled during the 2011 political turmoil.

The capital city of Tripoli fell to Libya Dawn last August. The Islamist militia established its own government to rival the internationally recognized one, currently in exile in the eastern town of Tobruk.

Al-Thanni confirmed that Tripoli’s self-proclaimed government is “illegitimate and unrecognized internationally. They are a group of outlaws.”

The United Nations has brokered several rounds of dialogues between opposing parties since September, but clashes remain despite a truce agreed upon by participating factions.